The 140th birth anniversary of Senator Jose Cortes Altavas will be celebrated on September 11, 2017.  Furthermore the 100th year founding anniversary of the town of Altavas in the province of Aklan is on January 2018.

In early May of this year 2017, planning was started to commemorate both anniversaries honoring Jose Cortes Altavas.  In a series of meetings in Baybay, Roxas City – Ike Altavas, Hutch Altavas, Dickie Altavas, Pat Cleope (of Altavas, Aklan), John Alaban, and Galen Altavas, and in consultation with the Altavas family and friends, the Altavas Historical Society, and the Altavas town government officials met to plan activities for these anniversaries.  One of the major initiatives was the creation of a statue of Jose Altavas to replace the bust of Jose Altavas in the town plaza of Altavas, Aklan.

Building of the Statue

Here is the status of the creation/building of the statue of Jose Altavas, from postings of Hutch Altavas in FaceBook. 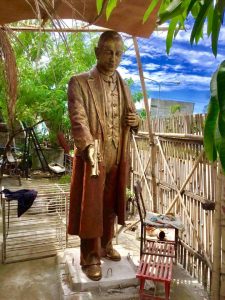 “Like the phoenix raising from the ashes”
The brilliant statesman and roads and bridge builder Sen. Jose Cortes Altavas raising. The 8 ft. full size statue will give the man who dedicated 45 years in public service and dubbed as the man who made Roxas, justice and the much deserved honor once it replaces the old bust in the town plaza in front of the municipal hall of Altavas, Aklan just time for his 140th Birth Anniversary on September 11 and also to celebrate the town’s 100 years founding anniversary come January 2018. (Very special thanks to the maestro Mr. John Alaban who built the masterpiece and cousin Frederick Peter C. Altavás who contributed his great talent and skill, to my Dad Ike Altavas who spearheaded and tirelessly worked with the project as well as to each and everyone in our family, relatives and friends who contributed their time and effort making this project come true.)

“Great leaders communicate a vision, captures the imagination and fires the hearts and minds of those around them.”
A monument fit for the brilliant statesman and one of Capiz and Aklan’s favorite son and the founding father of the town Senator Jose Cortes Altavas. The project is already 80% complete just in time for the 140th birth anniversary on September 11, 2017. Thank you very much to the maestro Mr. John Alaban, to my Dad Ike Altavas who is tired but happy while leading and tirelessly worked on this project, to cousin Frederick Peter C. Altavás who took his time out despite his busy schedule to help conceptualize and meticulously worked on the details and of course to the whole family and relatives headed by chairman Judge Elias Altavas Conlu, to the Altavas Historical Research Society, Inc. and to the Altavas municipal government. Thank you also to Capiz Gov. Antonio Del Rosario, Ronnie Dadivas and Pepe Atienza del Rosario.

Hutch Altavás
September 4 at 7:39am

“A great man is a torch in the darkness, a beacon in the superstition’s night, an inspiration and a prophecy.”
🇵🇭 Everyone is invited especially to all the families, relatives, friends as well as to the Altavasnon’s to attend the unveiling of the newly renovated monument of Sen. Jose Cortes Altavas on his 140th birthday anniversary on September 11, 2017 (Monday) at 2:00 PM in Altavas town plaza, Altavas, Aklan. A bigger and formal unveiling will also be held to celebrate the town’s 100 years founding anniversary next year January 2018. Please be a part of the legacy to pass on the next generation to come. Let the torch pass. Make it Tabai! 👏